Dudley is a metropolitan borough formed in 1974. It is located on the edge of the West Midlands conurbation, approximately 9 miles west of the city of Birmingham and 6 miles south of Wolverhampton. Rural Staffordshire and Worcestershire border Dudley Borough to the west and south.

Being at the heart of the Black Country, which also includes the neighbouring boroughs of Sandwell and Walsall and the city of Wolverhampton, Dudley has a rich cultural and industrial heritage. The Borough is predominantly urban in character, but rather than having one primary centre there are four main towns interspersed with smaller towns and urban villages. This has given rise to a very local feel that is a feature of the Borough’s communities.

The main town centres are: Dudley towards the north of the Borough, Stourbridge in the southwest, Halesowen in the southeast and Brierley Hill near the centre. The nationally renowned Merry Hill Shopping Centre and the Waterfront business and leisure complex now form part of Brierley Hill town centre. 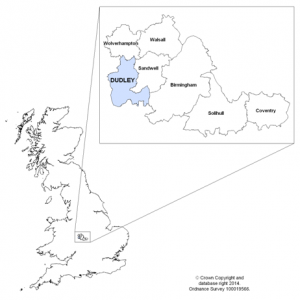 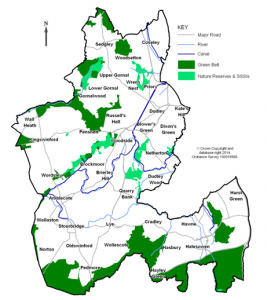 Dudley Borough In Brief (click each section to explore)

The latest population estimates from 2020, published by the Office for National Statistics, show that Dudley Borough has a population of around 322,400.  The population has seen sustained growth in recent years, with approximately 17,700 more people in the Borough now compared to the estimate in 2000.  Dudley is the fifth largest local authority district in the West Midlands Region based on population.  18.1% of the population are aged under 15 and 20.4% are 65 and over.

Population projections based on the 2018 estimates predict that the population of Dudley Borough will increase to 350,100 by 2040, an increase of 8.6% from the 2020 figure.  Those aged 40 to 50 and over 65 are expected to undergo the largest increase in numbers over the time period.

According to the 2011 Census, 88.5% of the Borough population are White British.  Dudley has become more ethnically diverse since 2001 when this figure was 92.5%.  Asian groups constitute 6.1% of the population, with the largest individual groups in the Borough being Pakistani (3.3%) and Indian (1.8%).  1.8% of people are from mixed ethnic groups, 1.5% Black ethnic groups and a further 1.5% from White groups other than British.

The latest figure for life expectancy at birth for men in Dudley Borough is 78.8 years, just over half a year less than the England figure of 79.4 years.  For women life expectancy is 82.2 years, marginally under one year lower than the national figure of 83.1 (2018-20 three-year average).  The 2011 Census shows that 78.2% of the Borough population consider themselves to be in ‘Good’ or ‘Very Good’ health.  The corresponding figures for males and females are 79.5% and 76.9% respectively.

As of December 2021 there were 10,625 people in Dudley borough claiming benefit principally due to unemployment, which constitutes 5.5% of the population aged 16 to 64. The equivalent figure for England is 4.5%. 7.9% of those aged 18 to 24 living in Dudley borough are claiming, notably higher the proportion for England of 5.4%.

According to data from 2020 Dudley borough has 13,600 households with at least one person aged 16 to 64 where no-one aged 16 or over is in employment. This equates to 15.2% of households, compared to 13.0% for England. These people may be unemployed but looking for work, or unavailable to work because of family commitments, retirement, study, sickness or disability.

In the year to September 2021 the employment rate of residents in Dudley Borough was 78.4%. This is the proportion of people in paid work, on government-supported training or employment programmes and those doing unpaid family work as a proportion of those aged 16 to 64. The figure for England was 74.9%.

Across the year ending March 2021 the average house price for all dwellings sold and registered in Dudley Borough was £216,458.  This is the highest figure amongst the four Black Country local authorities, but significantly lower than the £347,618 for England.  Comparing the Borough’s house prices with earnings gives an indication of relative affordability.  Figures from 2020 show that in Dudley Borough the median house price was 5.9 times the median full-time annual earnings of residents.  The ratio in Sandwell is also 5.9, with Walsall lower at 5.7 and Wolverhampton the highest of the Black Country local authorities at 6.2; the figure for England is 7.8.

The Borough covers 38 square miles / 98 square kilometres. Though predominantly an urban area, 18% is designated as green belt and 14% categorised as publicly accessible open spaces.  There are ten Sites Of Special Scientific Interest, of national importance for their geology and/or biodiversity, two National Nature Reserves and seven Local Nature Reserves, plus the river Stour and 16 miles of canal network.  The Borough has 22 Conservation Areas, which are areas of special architectural or historic interest and are a particularly important part of the Borough's heritage.  There are around 300 Statutory Listed Buildings in the Borough which are considered to be of national importance so are given special protection against inappropriate alteration or demolition.  In addition, just under 300 buildings of historic or architectural significance are on Dudley's "Local List", and are considered worthy of protection and conservation for their contribution to local character and distinctiveness.

The Borough has an extensive transport infrastructure with 644 miles / 1,036 kilometres of roads and access to the motorway network near Dudley and Halesowen.  A train line links Stourbridge to Birmingham, and funding has been secured for a new Metro line that will link Brierley Hill and Dudley with the wider West Midlands Metro and facilitate easy access to the national rail network. Preparatory works for the new Metro line began on Castle Hill in Dudley in February 2020, with plans for up to 16 stops with provision for two others.  Passenger services between Wednesbury and Brierley Hill are expected to start in 2024.  75.4% of Borough residents in employment travel to work by car, 7.9% walk, 7.3% take a bus and 3% a train. 3.5% work mainly from home (2011 Census).

Dudley Borough is ranked as the 104th most deprived of the 317 local authority districts in England (where 1 is most deprived), ranking it as less deprived than five of the other six districts in the West Midlands conurbation.  While this suggests Dudley has relatively low deprivation for an urban area, it masks the disparity in levels of deprivation across the Borough.  The latest national Index of Multiple Deprivation from 2019 showed that 28.1% of the Dudley borough population live in areas in the 20% most deprived in England.  These are principally found in a zone covering Dudley, Pensnett, Netherton and Brierley Hill, but also include parts of Coseley, Lye, Halesowen and Stourbridge.