Population projections provide an indication of the future size and age structure of the population.  They are based on mid-year population estimates and a set of assumptions for future fertility, mortality and migration, and are produced every two years by the Office for National Statistics. The projections are widely used for resource allocation and planning.  The latest 2016-based projections were published in May 2018.

Population projections are not forecasts and do not attempt to predict the impact of future government or local policies, changing economic circumstances or other factors that may influence demographic behaviour.

The analysis on this page looks at the difference between the mid-year population estimates from 2018 and the population projected forward twenty years to 2038.

• Between 2018 and 2038 there is a large predicted increase in the Borough's age groups 65 and over, with the proportionate growth getting larger as age increases.  This is most pronounced in the 90 and over age group where the male population is predicted to grow to more than two and a half times the size of that in 2018 and the female population almost double. 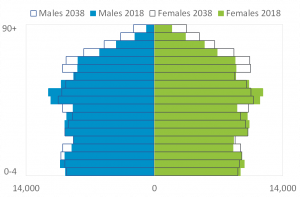 • For Dudley Borough a population increase in all life stages is predicted by 2038.  The pensionable age for 2018 is based on males aged 65 and over and females aged 64 and over, with the anticipated statutory pension age of 67 and over for both sexes used for the 2038 projected pensionable population.

• The largest increase will be seen in those of pensionable age due to people living longer lives.  This is despite people reaching the pensionable life stage at a later age in 2038.

• There is a smaller predicted increase in working age adults, however some of this can be attributed to the anticipated changes in the state pension age, which will mean adults being classified as working age for a longer period in 2038. 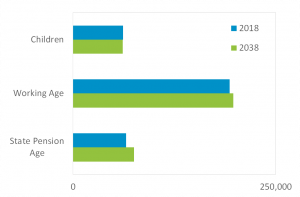