• This data comes from the 2011 Census, where responding to the question on religion was voluntary.  71.8% of the Dudley population identified with a religion, with 22% indicating they had no religion and 6.2% choosing not to answer the question.

• The largest religion in Dudley is Christianity, with 204,320 persons or 65.3% of residents identifying with this faith.  This is a higher percentage than the England figure of 59.4%.

• Dudley has a lower representation of some religions compared to England with Hindu (Dudley 0.6%, England 1.5%), Buddhist (Dudley 0.2%, England 0.5%) and Jewish (Dudley 0.02%, England 0.49%) religions where the percentage populations are at least half of those nationally. 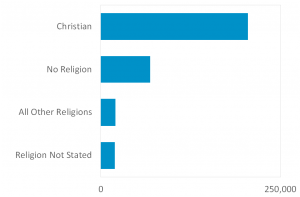 Religion of Residents Compared to England 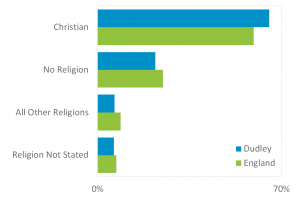