• The General Fertility Rate (GFR) is the total number of live births in a year per 1,000 women of reproductive age, which for these figures is defined as 15 to 44.

• The Dudley GFR closely followed the England rate between 2001 and 2011, with both showing an increase in fertility.

• Over the last two years rates for both Dudley and England have fallen, with the latest figures from 2018 being 62.7 and 59.2 respectively. 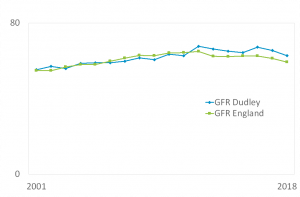 Fertility Rates by Age of Mother

• The lowest fertility rates are in the age groups 40 to 44 years.

• In the age groups under 20 and 20 to 24 the rates indicate a decreasing trend in fertility.

• It can be seen that rates in younger ages are decreasing and in older ages are increasing. 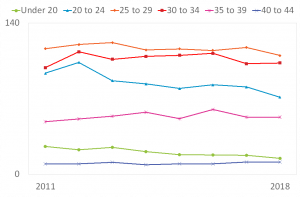